On the heels of our first original data based blog post reporting when people were most likely to leave their jobs, we haven’t stopped thinking about what other hiring trends are just waiting to be discovered. Based on our previous research, we know that people generally prefer to stay with their current employer for 12-month increments. We decided to tackle that information industry by industry. First up, one of the trickiest positions to recruit: salespeople.

Salespeople generally make their money via three different models: 100-percent commission, base salary plus commission and base salary plus bonuses. Each pay structure comes with its own advantages and disadvantages, many in regards to pay timing, meaning that each salesperson may have different thresholds for when they would leave their job and why.

Or so we thought.

Upon analyzing a sample size of just over 1,000,000 salespeople's resumes, from entry- to executive-level positions, it appears as though the vast majority of them all have the same New Year’s resolution: start fresh. 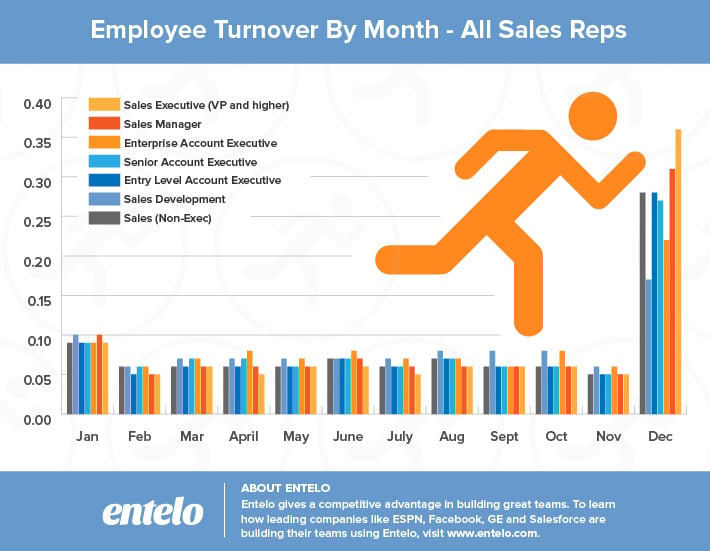 These are the kinds of results that should make everyone pay attention.

And when are those salespeople ready? If you’re shaking your head in disbelief that you’re hearing Christmas music before Halloween, you’re already behind.


Want to learn how Entelo can help you hire top performers from every industry, including sales, engineering, and marketing? Request a free demo and we'll show you.