Entelo Study Shows When Employees are Likely to Leave Their Jobs Over the last few years we’ve had the privilege of talking to thousands of recruiters about how they do their jobs.

For the increasing number of them who are trying to source hard-to-fill roles (e.g., engineering, design, data science, highly skilled sales and marketing, etc.), a key question to answer is “When are people most likely to leave their current employer?”

After all, if you know that people were statistically much more likely to leave at a certain point, you could optimize your outreach accordingly.

As we were having these conversations it struck us, we had never seen this research done and were in a somewhat unique position to do it. In casual conversations since we started Entelo, the common sense wisdom was that people tend to leave around the four year mark (i.e. 48 months after they first start with a company). After all, people grow tired of companies after a while and they want new challenges. And of course for people who are on standard vesting schedules, that’s the point at which they are fully-vested.

So it would make sense that the likelihood of someone leaving would resemble a bell curve. You know, a bell curve.

People probably wouldn’t leave less than a year in so don’t bother recruiting them then. And if they’ve spent 10 years with a certain employer, the odds that they just happen to be looking for something new are very slim.

So what you want to look for is an employee who is right around their four year mark at a company. Your second best options would be employees who have been with a company for three or five years.

Which all sounds good except for one thing. It’s completely wrong. 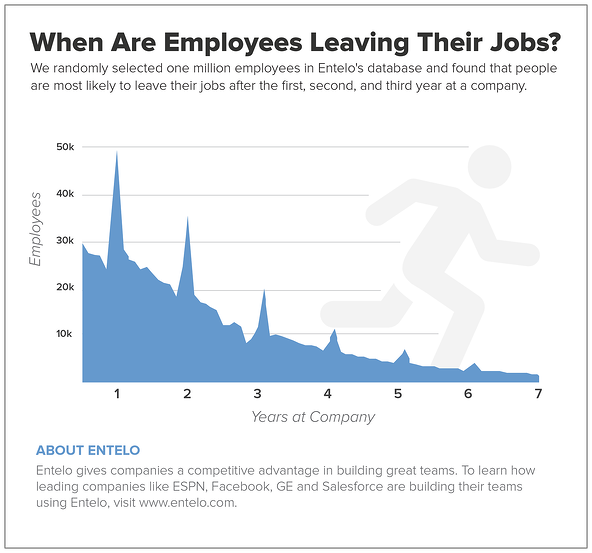 What conclusions can we draw from this?

Why those months? Because by most estimations there’s probably 60-120 days of time between when someone starts their hunt and when they end up in their next job. Obviously this is sometimes much longer and sometimes shorter and it’s tough to know with any certainty. But if you’re out recruiting someone a few months before their anniversary with their current employer, you’re doing it right.

Or not. After all, if someone leaves their current employer after a year to join you, what’s to say they won’t leave you after a year to join another company? This is a very controversial topic in the recruiting industry with some people advising companies not to hire “job hoppers” while others claim that’s stupid and that many people who move around just haven’t found that right fit yet. Rule them out and you’re missing out on huge talent pool.

If employees are going to leave after the one year mark, those are the times when they are most likely to be thinking about making a switch. (Obviously, you want to pay attention to your team ALL the time but in a world of scarce time and resources, it helps to know when you should pay particularly close attention.)

Why do people exhibit this behavior?

That’s tough to say. Stock vesting could actually play a role (e.g., people want to stick around for a year before leaving because of vesting cliffs). Certainly, there’s probably some psychology around saying “I worked at XYZ Corp for two years.” And of course, there’s a strong possibility that some of this data is skewed because people are lying. OK, lying might be too strong of a word. Let’s say “rounding up.”

If people are putting in 20 months with an employer and then taking a few months off before their next gig but rounding up on their resume, that would throw this data a bit. (This is another area that’s impossible to know with any certainty.)

We’ve baked these findings into Entelo Sonar and More Likely To MoveTM so if you’re an Entelo customer, the product already leverages this data. But even if you’re not, you’ll likely benefit from this information.

We’re going to be discussing a number of topics related to the intersection of big data and talent acquisition/management in the coming months. If you have ideas for any types of posts you’d like to see, please let us know in the comments!