How to Determine Cultural Intangibles

If you're looking for a candidate's past experience, their resume or LinkedIn will fill you in. Want to see an 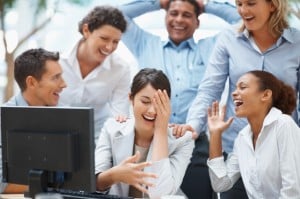 engineer's past work? Look no further than their Github. Want to make sure they are engaged in their space and passionate about the type of work they do? Twitter is a window into what they're thinking about when not on the clock.

But what about the rest?

As most elite recruiters will tell you, cultural fit and personality are often just as important as individual ability. A talented candidate who can't get along with the team could ultimately do more harm than good. Yet, sussing out what a candidate will be like to have in the office every day can be frustratingly difficult, especially if you only have a handful of interviews to pull from. There are, however, several practices you can implement to determine cultural fit and prevent the undesirable outcome of having a negative personality in your organization.

All Hands on Deck!

At Entelo, we loathe to leave interviewees alone on our entryway couches as they wait for an interview. Even employees who share no job functions with the candidate are encouraged to introduce themselves and have a quick chat. Primarily, it creates a welcoming, friendly atmosphere for the candidate. Taking it deeper, though, it can provide some valuable meta-data on them as well. As Malcolm Forbes once said:

“You can easily judge the character of a man by how he treats those who can do nothing for him.”

Try asking your office manager or other administrative employees how they were treated by the candidate. Although it's likely candidates will have their best foot forward as soon as they step in the door, they may slip out of interview mode when speaking with employees not directly involved in their hiring cycle. Further, your engineering candidate probably won't be discussing code with your marketing employee, so you can get a sense of how they'll get along were they to be sharing the same office.

Out of Office Responses

Hosting happy hours or other social events is a great way to interact with many candidates at once in a non-interview setting. Renting out a room at a local bar and encouraging employees to invite professional candidates, while also looping in those in your pipeline, is not only an opportunity to gauge personality, but also to build a genuine relationship with candidates not based on their utility in filling one of your roles. Getting to know candidates' goals and ambitions over drinks may lead to a high value hire down the line.

Facebook has has unmitigated success through their various Hackathons. For the unfamiliar, Facebook sends recruiters and engineers to cities all over the world and invites dozens of engineers to work on the development issues the company is struggling with. Not only is this a great branding and talent acquisition opportunity, but Facebook can essentially crowd source solutions to their roadblocks and approach problems from a new angle.

Most obviously and most explicity, you need to ask the right questions to pinpoint personality. Rather than the open-ended "tell me about yourself" or "what do you do for fun?", ask questions that give perspective to the candidates' past. At Entelo, we've found the following questions to be most illuminating: