Hiring Up? 4 Methods for Hiring Your Future Boss

Recruiters wear many hats. They find themselves talking to hundreds of candidates of every background, and 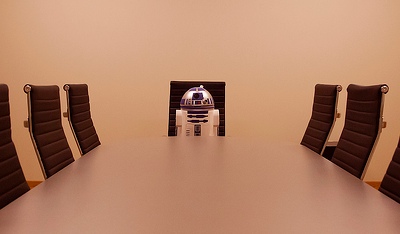 must be of a mind to know what the Sales, Marketing, Engineering, and every other team needs.

Recruiting more junior candidates for your own team, or finding and qualifying and then passing along candidates for other teams, is gravy. However, you may at some time find yourself recruiting for the position above you, looking for someone who's more experienced and more knowledgeable than yourself. How are you supposed to qualify someone for a role you're not qualified for? And more importantly, what do you ask of your boss to understand for yourself what working for them will be like?

At Entelo, I had the privilege of being a part of the selection process for our Sr. Director of Marketing Position. This was an exciting yet harrowing task, as I was simultaneously in a position of power, yet at times felt in over my head. This hire needed to be someone far more experienced than me, and the thought of appropriately assessing someone who knew far more about my industry seemed counter-intuitive. What I ended up doing was taking a step back and looking at the big picture of our marketing goals, and using these as a framework for my line of questioning. I coupled this with some specific questions about leadership style, and was able to paint a picture of how the candidate would perform in their role as well as my direct superior. Here's what I focused on:

What are a few projects or problems you would tackle right off the bat if you worked here?

This question is a bit of a softball, but it served two purposes. One, you get a sense of how much the candidate knows about your company already, where they see room for improvement and what their ideas about the most crucial tasks to knock out are. Secondly, it gives the candidate a chance to humble you. As I said earlier, this candidate is meant to be far more knowledgeable and experienced than you, so if they don't blow you away with their plans and ideas, they're probably not the right person. You want to feel like you're already learning from them even in your first conversation, and can see yourself continuing to learn from them as time goes by.

What is it about this company you find attractive?

Presumably, if they're truly a star candidate, they'll have their pick of competitive offers. A slight variation of "why do you want to work here?" allows you to get the candidate's sense of the big picture and how they see themselves contributing. You want your future boss to be excited and inspired, because if they're not on fire for the opportunity, you won't be either.

Give me an example about a decision regarding one of your employees you wish you could have back.

This one relates directly to you as their employee. You'll get insight into their leadership style as well as how they learn from their own actions. Having your boss tell you about something they did wrong lets you know how they're more likely to deal with you or your teammates in a similar situation. Which is more, you'll probably get a look into what your boss finds the hardest or most undesireable part of their job.

Try and get a hold of individuals who worked for this candidate in the past and ask them what it's like to be a part of their team. The references the candidate lists will always be overwhelmingly positive, and equally-ranked colleagues will be hesitant to throw a previous co-worker under the bus. But with the boss-employee dynamic, individuals are far more likely to be candid. For the best results, try to speak with people not currently working for your future boss, but rather employees they had previously.

After using the above questions in conversation and carefully targeting who I contacted for references, I was able to get a pretty good idea of how good our candidate would work out for the company and what they'd be like as my boss. Proof's in the pudding, because 8 months later, Entelo marketing is rocking and rolling,  my boss and I have had no problems, and we're putting together a smart and exciting team. Go forth, recruiters, and do likewise!