Did You Know the Talent Gap is Costing Recruiters an Extra $20 Billion?

The widening gap between candidates and recruiters is no new tale, so why do we continue to recruit from ineffective networks in the war for talent?

Unless you’ve been hiding out for the past year or two, you’re aware of the disconnect between talent and recruiters, specifically on LinkedIn. Despite the gap, there’s no immediate fix for the solution, and you probably have a LinkedIn Recruiter account and will most likely log into the network within the next 24 hours.

This Slate Magazine article proposes the question: Can we do better than LinkedIn? The short answer is a resounding yes, but immediately and realistically, most would choose not to abandon LinkedIn because there simply isn’t a better alternative.

Mass messaging, or recruiter spam, continues to be the sourcing solution for many teams, and the idea may seem logical to some (it's like throwing a bunch of cards at a wall with the hopes something sticks), but candidates’ attention spans are not what they used to be. Recruiters' outreach is distorted, hackneyed, off-base, and, because of that, ignored by those for whom it was intended.

The problem lies in LinkedIn’s current purpose and function for job seekers and candidates. It’s a one way road of recruiter traffic. The network has become a place where you set it and forget it. Job seekers create a profile, fill out the blanks, and wait for recruiters to do due diligence and follow up with a job offer.

Actively recruit talent on sites other than LinkedIn.

In an interview with Jobvite CEO Dan Finnigan, leading HR analyst Bill Kutik discussed the disconnect between networks being used by job seekers and by recruiters. Despite LinkedIn's omnipresence as the definitive social network for professionals, most candidates on LinkedIn aren't grazing any deeper from the top of the talent funnel. Instead, they’re making moves on sites like Facebook and Twitter.

To put things in perspective, a study by iCIMS found that Facebook ranks as the top site for conversions between viewing a job opening and applying for it. While 65% of candidates expect to find jobs on LinkedIn, only 30% actually convert and fill out a job application.

While LinkedIn boasts 300 million users worldwide – nonetheless a solid talent pool – exploring and doubling up on other networking alternatives as sourcing sites can bolster recruiters’ resources.

LinkedIn may be the obvious go-to for finding professional profiles, but looking to other sites that immediately work in service of your recruiting intentions can reveal a number of gem candidates.

Optimize your job posts for Google.

Before heading to sites like Indeed, CareerBuilder, or Glassdoor, the first place candidates go to search for jobs is Google, Bill Kutik said. What this means is recruiters need to start optimizing their job postings and careers pages to make the most of how Google crawls their site. Check out these resources for ramping up your site's SEO, or search engine optimization:

A costly disconnect and talent adaptability

The issue isn’t that candidates don’t exist. Finding qualified talent is the issue, and hiring inexperienced, static candidates comes at a price.

The U.S. alone is losing about $29 billion dollars in productivity and recruiters are spending nearly $2.4 billion hiring subpar candidates, according to PWC’s Adapt to Survive study.

The most adaptable market in the country? The Netherlands. 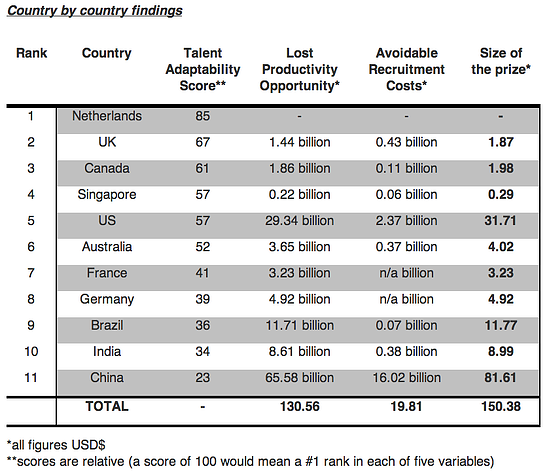 The talent gap continues to be a dark grey cloud hovering above even the best talent acquisition pros, and as we’ve learned from PWC’s talent adaptability study, optimizing the search for talent means keeping track of where candidates are and how they’re responding to your recruiting efforts. Measure when job postings get the most engagement (i.e., clickthroughs, conversions) on your social networks. A/B test your careers pages and job postings. Understand each candidates persona and which benefits and pitch style appeals best to them. Tweak your outreach and evaluate alternative approaches for sourcing and appealing to candidates, and the results may pleasantly surprise you.