Uh-Oh, Underperformers? Here's the Most Effective Way to Give Negative Feedback

"If you don't have anything nice to say, don't say anything at all."

Despite how impractical and delicate the phrase may sound today, there is truth and good management advice to take away from the familiar adage.

You probably had a specific team member in mind after reading this post's headline. But let's pump the brakes before questioning your hiring decision and planting the seed that you're a terrible recruiter.

Guide the team back to that golden path of success everyone talks about by using one unforgettable structure for giving negative feedback.

The criticism sandwich, or as we like to call it, The Sandwich of Tough Love. 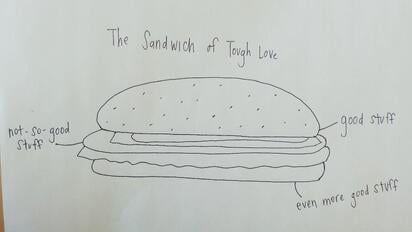 Fairly nondescript, but you know what we mean.

In a sensible world, the metaphor sounds arguably absurd, but only because any classic sandwich connoisseur (including myself) would agree that the inner ingredients are the best part. If you're part of this crowd and you can suspend disbelief as a good manager, consider this concept a happy medium: The "bread" simply serves as a necessary vehicle for the core, keeping all ingredients intact to prevent a sloppy, perhaps unmanageable situation. 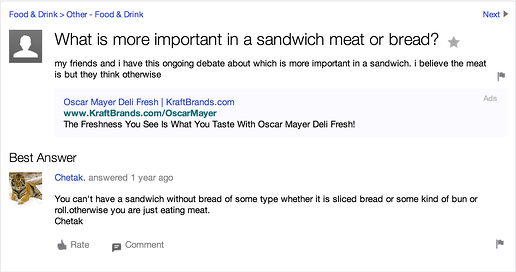 This big cat's got the right idea.

Just as user Chetak implies, serving criticism without positive feedback is similar to having only meat — and having too much criticism or meat just isn't good for anyone.

Negative feedback is most effective when it's layered between positive feedback. Your team members have thick skin, but they're not punching bags.

Daniel Coffeen, who taught MFA students at UC Berkeley, wrote an article explaining the clear but often crossed divide between judgement and critique.

"Judgment is brutal and callous — whether you like something or hate it — and as such can be a good parry for a world full of shit (although I prefer indifference to judgment — less energy expenditure). Critique, on the other hand, is generous: It engages the other on its own terms — or on terms of the event. It lets the other do its thing and then wonders how the other can extend it and it, in turn, can extend the other. It is a glorious repartee."

On its own, criticism is a recipe for disaster and affects the way employees perceive their own success. Think lower satisfaction and retention rates, jumbled communication among team members, fruitless collaboration, and a bad company reputation that can make it difficult to hire talent.

Being tough does not equal being mean. Stray away from "bad sandwich ingredients" like name-calling, swear words, threats, or rude gestures like pointing or yelling. Keep it professional and concise. Explain what went wrong, discuss why it went wrong, and how to be better prepared with a solution for the next time there's a chance the mistake could happen. Ranting about your personal gripes with an employee should be reevaluated and/or saved for a separate conversation.

By the time you realize your employee's performance is slipping, the issue may already be slightly out of your hands — but don't be alarmed. Underperformance is common, and could result from a mix of factors, one of them possibly being your management style. As soon as you realize that an employee is having more than just a few bad days, set aside some time to figure out where the issue lies and how you can assist them to get them back to their A-Game.

Employees keep tabs on certain parts of their performance reviews more than others. While one team member may still be livid on your changes to his or her plan, another could be enthusiastic that you're happy with hers. An employee who loses sight of the bigger goal because of a critique slows down the rest of the team.

A simple way to alleviate the variance is applying a mostly 1:1 ratio for the feedback, like this example:


"Great job organizing last week's meetup at the office! There was some confusion about the main meeting place, and we started the keynote about 10 minutes late. Next time, let's have a greeter at the front door so attendees know where to go. But one thing to note is that we had a better turnout than expected!"

Here is why this works:

This is not to say that managers should start bloating others' egos, however. Offer a balanced mix of positive and negative feedback to keep employees focused on what's most important: There is always room for improvement.

If you're right on the fringe of recognizing signs of an early underperformer, try this: Check in with the individual and casually discuss his or her plans for tackling the team's next project. Ask for details, propose potential problems, and prompt them to share their logic behind doing things one way instead of another.

By taking employees through the process of critical thinking, you can catalyze a positive shift in the way they work and and think, allowing them to feel empowered with a sense of responsibility and leadership.

Ultimately, good managers are expected to equip their team for success with transparency and quality, frequent communication. When you come across helpful links and reading materials, share them. Provide visual, proven examples of your expectations. Report comprehensive metrics of success.

Got a tip or story on telling employees like it is? Tweet us @Entelo or share your thoughts in the comments. Don't forget to subscribe to the Entelo Blog to stay updated on the latest recruiting trends and tips!